What is Isopropyl Alcohol?

Please note we have limited stocks of this product.

Isopropyl alcohol (IPA) is most popularly known as rubbing alcohol, a first aid kit must-have. It is a colourless, flammable chemical compound and can be easily identified by its strong odour.

Isopropyl alcohol (C3H80) was the first commercial synthetic alcohol. First produced in 1920, a group of chemists at the Standard Oil Company in New Jersey discovered it whilst studying by-products of petroleum. IPA is now one of the most widely used solvents in the world. The demand for this multipurpose chemical is driven by its applications as a solvent in a variety of industries. 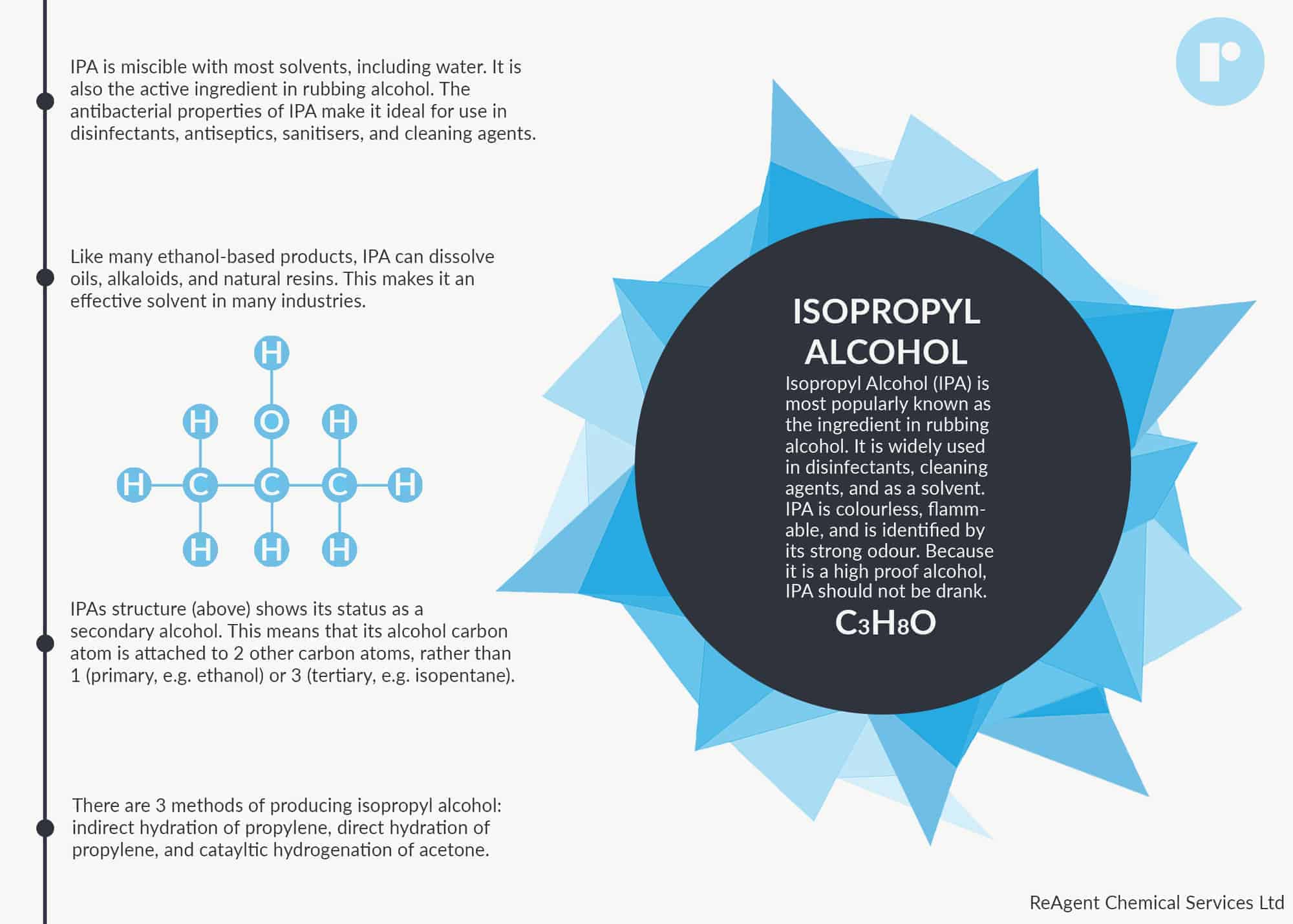 As a volatile liquid, isopropyl alcohol evaporates quickly when exposed to air. As well as this, it doesn’t leave behind any residue. This makes it an ideal cleaning agent as it leaves no streaks on surfaces. Its antibacterial properties also mean that it is well suited as an antiseptic, disinfectant, and sanitiser.

IPA is miscible with most solvents, including water, ethanol, ether, and chloroform. Like other ethanol based substances, such as denatured alcohol, IPAs capacity to dissolve substances like oils, alkaloids, and natural resins demonstrates its effectiveness as a solvent.

While it is miscible with many solvents, isopropyl alcohol is not miscible with salt solutions. This means that it can easily be separated from an aqueous solution by adding sodium chloride to the mixture. This process is referred to as salting out.

When isopropyl alcohol is mixed with water, rubbing alcohol is created. This product has a wide range of uses, from disinfecting wounds to de-icing your windshield.

IPA is not to be confused with its pale ale counterpart. Isopropyl alcohol is generally 70% pure alcohol, but concentrations can reach higher percentages. While this makes it an effective solvent and cleaning agent, it also means that it is not safe to drink. In fact, as little as eight ounces could be fatal if consumed.

IPA is the simplest example of a secondary alcohol. This is because its alcohol carbon atom is attached to 2 other carbon atoms.

The most common way to write isopropyl alcohol’s formula is C3H80. However, it can also be expressed in a number of ways, including: C3H7OH, CH3CHOHCH3, and (CH3)2CHOH. No matter how you choose to write the formula, the number of carbons and hydrogens do not change.

Propylene, also known as propene, is an organic compound which is most commonly used in the petrochemical industry.  Up until 1951, indirect hydration of propylene was the only method used to produce IPA. This method is also referred to as the sulphuric acid process because it requires a reaction between propylene and sulphuric acid. There are 2 steps involved:

In 1951, direct hydration of propylene was introduced and quickly overtook its predecessor in popularity. It is a more recent manufacturing process, and is also less corrosive.

While this method involves less steps and is less corrosive, it does require high-purity propylene instead of the low-quality propylene that indirect hydration uses.

Acetone is an organic liquid closely related to isopropyl alcohol. When IPA is oxidised, it produces acetone. The same process happens in reverse as a reduction of acetone, via catalytic hydrogenation, generates isopropyl alcohol.

Catalytic hydrogenation is achieved by reacting acetone with hydrogen gas. This is carried out under high pressures, and in the presence of metal catalysts (e.g. palladium and ruthenium).

This method is useful because it can be coupled with one that produces excess acetone. This makes the catalytic reduction of acetone as a means of producing IPA an effective and efficient manufacturing process.

At ReAgent, we manufacture isopropyl alcohol in a range of sizes. From 2.5L screw cap bottles to 1000L IBCs, we offer a huge variety of quantities and packaging materials to ensure that the specific needs of your business are met. As an ISO quality approved company, you can trust that all of our chemical products are top grade and cost-effective. Get in touch today to find out how we can help you achieve your business goal.

What Are The Uses Of Brick Acid?

A few weeks ago, we explored in detail what brick acid is. We’re going to go back into this... read more 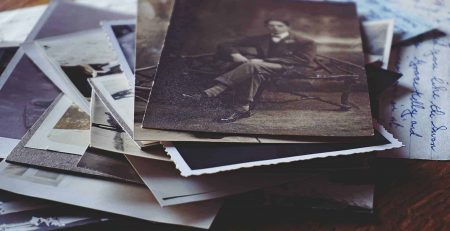 The History Of Hydrogen Peroxide

Hydrogen peroxide (H2O2) is a colourless, weak acid which is miscible with water. It is pale blue in its... read more 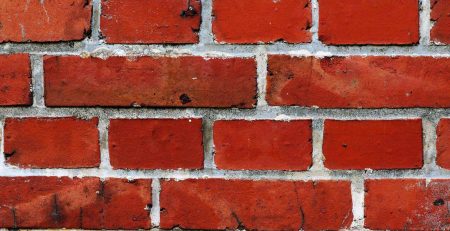 What Is Brick Acid?

Brick acid is an extremely powerful cleaner for the building trade that, as the name suggests, removes tough debris... read more 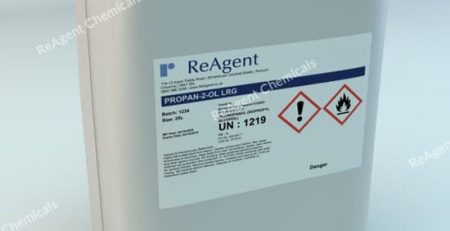 Isopropyl alcohol, which is also known as isopropanol and propan-2-ol, comes in different grades and has a large variety... read more

Isopropyl alcohol and denatured alcohol both have a variety of applications in a range of industries. But what is... read more 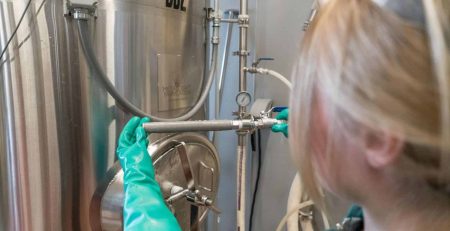 How Is Toluene Made?

Toluene, which is also known as toluol, is a colourless solution which smells a little like paint thinner. Its... read more 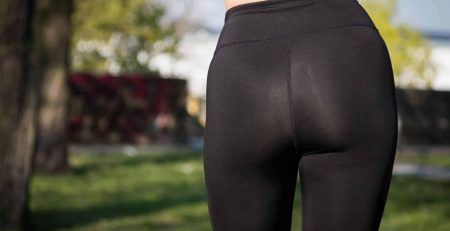 What Are The Uses Of Tetrahydrofuran (THF)?

We’ve taken a look in a recent blog post at what tetrahydrofuran (often abbreviated to THF) is. Here, we’ll... read more

You Can Now Buy Pallet Quantities of Water Online

Antifreeze is an additive used to decrease the freezing point – and increase the boiling point – of any... read more 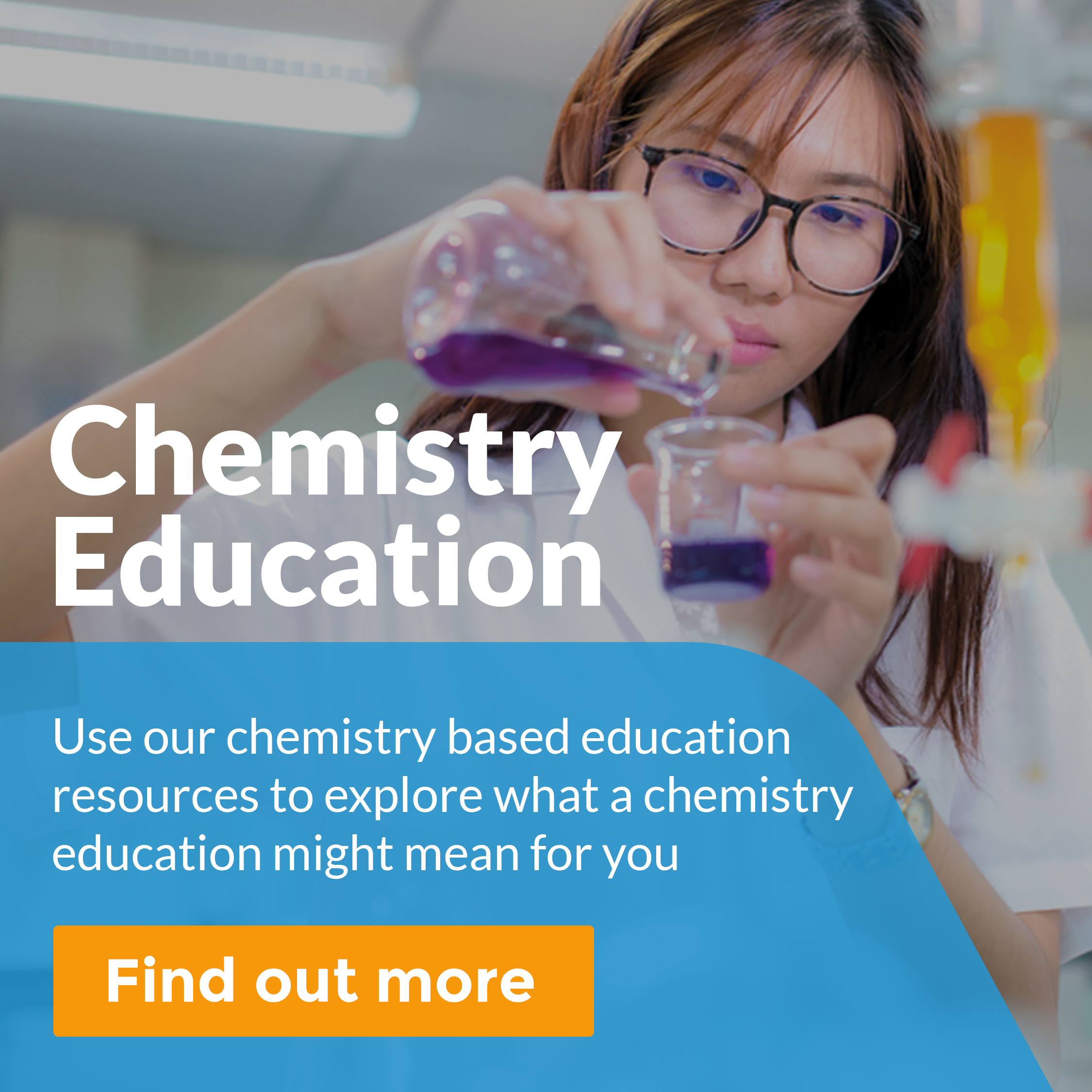 What Are the Uses of Isopropyl Alcohol?